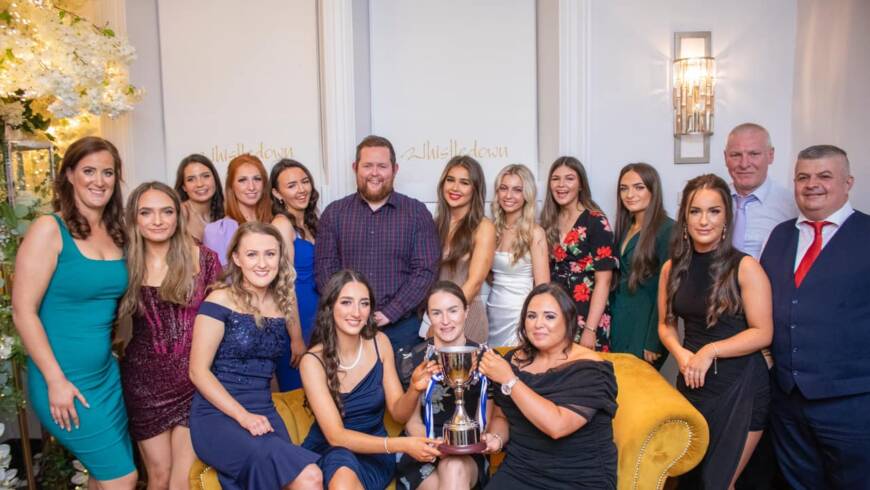 The Oisin Suite in The Whistledown Hotel was a see of blue and white once again for the much anticipated return of the Annual reunion which saw members and supporters of the club come together to celebrate once again.  Fear-a- Tí for the evening was the very capable and articulate Brendan Rice, who welcomed County Chairman Jack Deveney guest speaker Sinead Aherne and Canon Kearney. Brendan paused for a minutes silence in memory of deceased club members, paying fitting tribute to our late Club President Barney Carr who could not attend the evening.

Jack Deveney was the first of our special guests to address the crowd and he spoke of his admiration for Warrenpoint Club in their participation in all areas of Gaelic Games and activities and their forward thinking when it comes to member participations, community participation and fundraising. Jack also thanked Warrenpoint for their continued support and assistance to the county and province in their many different roles on teams, committees and management roles.

In a wide ranging and comprehensive address, Club Chairman Larry Byrne stated that he we should look back on the past twelve months with much pride, despite the challenges our community faced during the Covid-19 pandemic, it was heartwarming to see the club coming together and forming a response team to help within the local area. We now work towards continuing on our forward journey, of having fun and operating as TEAM Cumann Pheadair Naofa, Warrenpoint, at the heart of the local community for whole of family, for the whole of life. “The success of Cumann Pheadair Naofa should not just be measured by trophies and results on a playing field: It’s playing a role in the community that makes an elite GAA club. And many of you listening today are the reason why Cumann Pheadair Naofa has a higher standing than ever before. You should all be proud of the difference you have made in unprecedented times.”  Despite the challenges of lockdowns and Covid restrictions, the club ensured that the show went on. In that long winter lockdown, we saw virtual concerts and initiatives like the the ‘Ulster GAA- Every Step Counts’ by the Healthy Club section. The work of our coaches during this time should also be commended, “they strove to make sure we weren’t idle and fully fit and prepared for the return to action.”

Larry spoke passionately about all sections of club and also touched on aspects of the club which still require development. He continued by highlighting our core mission statement for the club and, “The emphasis being on volunteerism, community participation, games development  and people development.” He appealed for people to continue to get involved in the club, that there was a role for everyone. Larry again paid special recognition to our volunteers who, without them, we would have no club.

An excellent souvenir programme for the event was edited and produced by Mícheál Moore which illustrated in words and photographs the breadth of activities organised by Cumann Pheadair Naofa over the past 12 months and highlighting the successes both on and off the field.

Sinead Aherne was a very popular guest speaker of the night, Sinéad Aherne is a household name in the LGFA with her career beginning as a 17 year old back in 2003. 19 years later she is still regarded as one of the games top forwards. She has won 5 All Ireland titles captaining Dublin to the 4 in a row from 2017 – 2020. She has also received 7 All Stars in her illustrious career to date. She addressed the audience in congratulating Cumann Pheadair Naofa on the massive steps they have made in recent years and said she felt that the ladies team were one to watch out for. She spoke of the commitment, dedication and long hours of training it took her over the years and reminded the girls, “every single minute is worth it in the end.”

Collette Lock for 2020 and Helen and Declan Carville for 2021 were very popular recipients of the Chairman’s Club Person of the Year Award for their outstanding contribution to the Club with particular reference to the covid-19 response team within the community led by Colette and the new initiative of GAA For all introduced by Declanm, Helen and Michael Carville. Larry described the recipients as a hard working Gaels who could worked quietly for the betterment of our club, community and providing access to the club for everyone.

Club stalwart Brian Grant received a Lifetime Achievement Award for his services to Cumann Pheadair Naofa. As the Irish News said, Brian was “a classy centre forward” – one of the best in the country.” Brian made his debut for the seniors at the age of 16 in 1948 and was then captain of our senior team and played for 16 years and was an integral member of the 1953 Championship winning team. The success of the club today is built on the back of people like Brian, who continued to serve St Peter’s after their playing career came to an end.  Brian Served as part of the management team in the 1970’s who then reached a championship final. Brian collected his award to a standing ovation from the crowds.

Special Leadership and Recognition Awards were made to Club officers whose  work made a unique difference to the delivery of Club activities and the successful functioning of the club:

Colm Rice was a deserving recipient of a Special Recognition Leadership Award for his leading role as registrar. Colm works tirelessly on registration elements of the club and has taken over the running of the new online registration system.

Mike Barnett was the next deserving recipient of a Special recognition Award for his role in leading the LGFA section, as well as being a member of the GCDC.

Sean O’Hare was the final recipient of a Special Recognition Leadership Award for his commitment and dedication to senior football in the club. He takes on any role given quietly and without him there would be many tasks left undone. 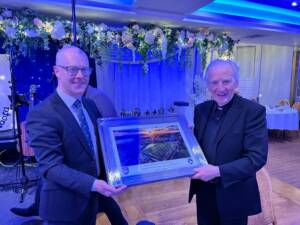 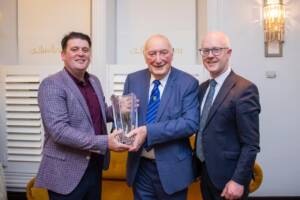 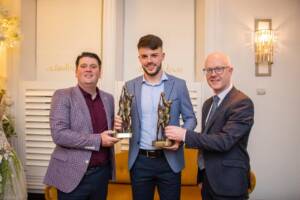 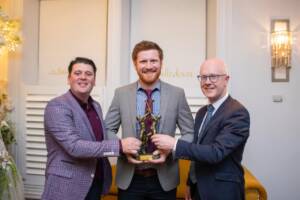 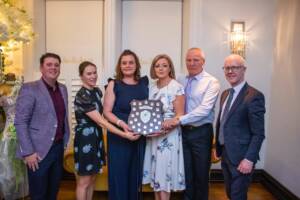