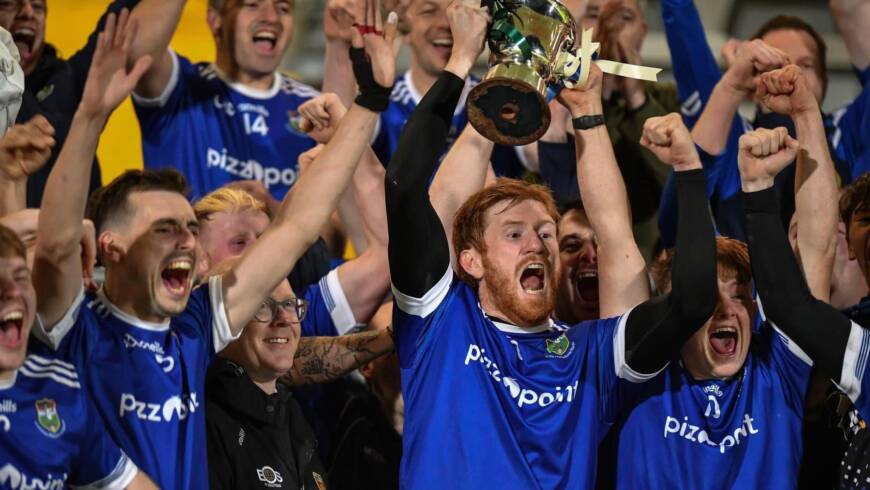 Having competed and failed for county honours over the previous two/three seasons, was this to be another Groundhog Day? failed promise? A year of if only? What went wrong? Again!

Warrenpoint had for a long time been seen as just another failed attempt at a hurling team, a side that others looked on as a just a fixture to be fulfilled on their path as they’d ultimately go on to progress to greater/better things. Could this be a stereotype that this current crop of players could finally shake free of and resign to the history books, never to be seen again! For the thousand plus supporters who braved the cold and dark Friday night they were privileged to have been treated to an exciting and thrilling game well worthy of the entrance fee.

On show were two teams who desperately looked to escape junior, feast on the laurels of success and a chance to dine with the stronger well-known clubs in Down at a higher level for 2023. Warrenpoint had long desired to rid themselves from the shackles of their darker days, missed chances and this year Sylvestor McConnell & Marty Houlahan had seen a hungry driven side, full of desire, ambition and passion build on the brilliant groundwork of Tom Daly & Sean Mallon of previous seasons to fly the blue flag highest come 9pm, as they were eager to surpass the clubs first ever championship winning break through team of 2009.

To a large and vocal Páirc Esler crowd the blues got off to a perfect start as the lightning-fast Cathal Fegan fired over the opening score inside the first minute off his left-hand side, much to the delight of the large Warrenpoint supporting crowd in attendance. Within four minutes Castlewellan’s young star, Matthew McCabe levelled with a fifty-metre sideline free. By the sixth minute Matthew Teague & Fegan had given the blues a two-point advantage as the contest was sparked into life when a long ball long speculative ball into the square from Teague was fumbled by Michael Keown and the inrushing Fegan flicked the sliotar to the net for the opening goal and give the blues a 1-2 to 0-1 lead inside the first eight minutes. With Allie Higgins sweeping up any loose ball deep inside his defensive zone and Teague a constant threat up front Castlewellan were limited to sporadic half chances and had to work extremely hard for their scores as Sean Hardy, Tieran Connolly & McCabe kept the ‘town within touching distances of a very driven ‘point side.

Man of the match, John O’Kane pointed three frees in the first half and along with the unstoppable Fegan, who exploited his scoring talents, the blues were on top and looking like they were not going to accept anything less than victory. To emphasize his energy and speed, Fegan slotted over a superb point off his left as he dodged around several green jerseys for the score of the game, much to the delighted cheers of the crowd with only fourteen mins played.

This may have only been a junior title final, but any neutral could have been forgiven for being a few days too early for the intermediate, or indeed the senior county decider, such was the passion and skill on display on Friday night. The quality and tension of this final made the game unarguably the most exciting game on view as Castlewellan made Warrenpoint work hard for every score and looked to repeat their round robin fixture of six weeks earlier over Warrenpoint.

Castlewellan captain and centre half back Jason Croskery, midfielder Dara Rodgers, Hardy and Connolly gave the blues plenty of headaches over the course of the contest and so nearly could have resigned them to another year of despair, toiling in a junior championship they had so longed to escape, as the teams retired at the half 1-9 to 0-7 in Warrenpoint’s favour.

Castlewellan, like the blues have also longed to end their years in the junior ranks and opened the scoring seconds into the start of the second half with a Matthew McCabe free. The blues had made a change six mins before half time that ultimately proved to be a game changing move with Jamie Grant eventually founding his range, he gave Warrenpoint a new attacking edge and restored the blues lead to a safe five points with two superb strikes off his left.

With fifteen minutes left and Warrenpoint looking comfortable for a second ever Hurling title, Castlewellan looked to have spoilt the party, a Warrenpoint puckout was picked up by Lorcán Cairns, his long delivery ended coming back to Dara Rodgers, whose pacy penetrating run ended with a half-blocked shot finding an unmarked Cillian McCay on the edge of the square, who smashed the sliotar past a helpless Anthony O’Brien.

The game was now in the hands of the gods as any mistake now could have resulted in dramatic success, or failure for either side with Matthew Muldoon levelling the contest at 1-15 each. Castlewellan now had all the momentum and were looking to resign Warrenpoint to a second final defeat in two years. But it was former county player and free taker expert, John O’Kane that ultimately saw the end to a thirteen-year championship famine for the south down side as he slotted over the last four of Warrenpoint’s scores in the final quarter. Castlewellan will agonize over the last minutes of the game as they could so easily have sent the game to extra time and indeed could possibly have won it had Matthew McCabe’s frees found their mark, but the pressure and responsibility on this young star was just too much to bare and thankfully for Warrenpoint they held on to their slender lead and spark emotional post game celebrations for all those in blue. 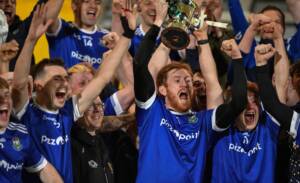