For any parent or spectator that was lucky enough to be in Ballyholland on Saturday they were entertained by one of the most exciting and thrilling games of football seen at this level for many a year. The day started off with the Cumann na mBunscol 9-a-side final between Millennium PS in Saintfield overcoming Carnacaville PS, a feat extraordinary in the fact that Millennium primary school only had three boys that play regular Gaelic for their club side Carryduff. Next up was the much anticipated meeting of St Dallans and Carrick Primary schools in the 11-a-side final. This was a replay of the Canon Esler Final last month when Carrick proved that they were just too strong for their Warrenpoint neighbours on the day and ran out convincing winners 6-13 to 1-7. The St Dallans boys all knew that that score line never really reflected the quality and talent that lay within their ranks and with the masterful guidance of Mr Brendan Rice the self-believe within the team had started to shine through. Thirty seconds from the throw-in the ball was nestling nicely in the back of the Carrick net, when midfielder David Ruddy had won possession and quickly released the ball to Niall Rice, Niall Turned to shoot for a point but it dropped over the head of Ronan Downey, the Carrick goalkeeper. Within a minute St Dallans had increased the lead further when Callan Morgan gathered the ball out on the wing and very wisely opted to fist it over the bar as he was being quickly closed down. At this stage with the large crowd clearly cheering on the underdogs from Warrenpoint the Carrick side-line was deafeningly quiet in shock at the excellent start the young blues had hit them with. But this spurred the Carrick side on as they started to raise their game and thus replied with two point from Cian Cunningham. The Warrenpoint tactic of deploying Caolan Freer (selected as corner forward) as a sweeper in front of the dangerous Carrick forwards Eoin Loughran, Cian Cunningham and Daniel Shields was making this a real appetising encounter. Carrick struck again for another point this time from Cain Cunningham who had moved away from his marking job on Niall Rice. St Dallans replied with another fisted point from Callan Morgan to maintain their two-point advantage.

At this point St Dallans were dealt a cruel blow that was to have an influence on the rest of the game, a Carrick clearance saw James Murphy collide with one of his own players and although he played on for several minutes, he had to come off shortly afterwards, clearly in some discomfort. St Dallans masterful game plan now had to be reshuffled, which saw Niall Rice play further away from goal in an effort to strengthen up the midfield/half-forward line.

Carrick tried desperately to thwart the St Dallans superiority, but James Sweeney, Jamie Powell, Tiernan McGivern and Darragh Austin were outstanding and diligently stuck to their jobs, tightly marking the Carrick forwards and allowing them very little time on the ball. Any high ball that came the way of Loughran and Cunningham was broken down by sweeper Caolan and thus allowed James Murphy and David Ruddy to get possession around the middle third of the field.

Carrick worked really hard and were rewarded with three points from Cunningham (two) and Shields which saw them take a one-point lead for the first time, before Darragh Murphy chipped in with a delightful point of his own when the ball looked like it was heading wide, to level the game once more with less than five minutes of the half remaining.

Carrick were now making switches in several key areas in an effort to wrestle the game back in their favour. When Cain Cunningham eventually broke through one on one with the Warrenpoint keeper, a high thunderous shot brought an absolutely breath-taking save from Finnén McCann as he dived full length to his right and palmed the ball wide. From the resulting 50m Cian Cunningham put the ball over the bar as Referee Michael O’Rourke brought first half to an end. St Dallans 1-3 Carrick 0-7.

The start of the second half was very nearly deja vous for the Carrick goalkeeper when Niall Rice once more tested out the height of Ronan Downey in the Carrick goals, unfortunately for the blues this one was saved. But minutes later an excellent pass from David Ruddy saw Niall slot neatly over the bar. Cunningham did likewise for Carrick and then the luck of the blues took another cruel blow. A goalmouth scramble that had seen Jamie Powell clear the ball off the line and a block from Darragh Austin saw the ball land outside the 14m line only for Cunningham to swing his boot at the loose ball and watch it zip past an unsighted blues keeper and defence.

Cian Cunningham was again to the fore when his side-line kick dropped over the bar as St Dallans were now five points adrift and the work ethic of all eleven boys in blues stepped up another level as they tried hard to get back into the game. Caolan Freer shortened the gap with a point, but this was cancelled out by another Carrick score, this time from Shields. With minutes left on the clock a high ball into the Carrick goals bounced around like a pinball before Darragh Murphy eventually dispatched it to the net. Time was running out for the Warrenpoint side as they looked to get the all-important winning goal, but alas for the blues of St Dallans this was to be the final score of the game. A game that had seen goal line saves, boys putting their bodies on the line, brilliant score taking from both teams, real hard hitting tackles (worthy of older grade sides) and finally some brilliant goalkeeping displays. 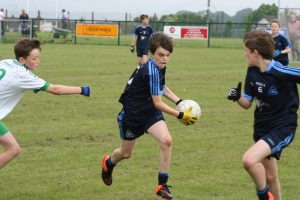 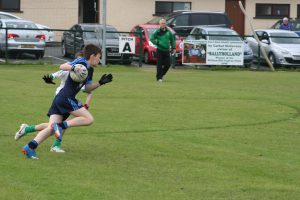 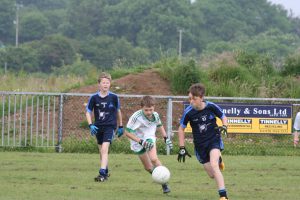 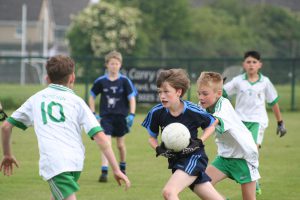 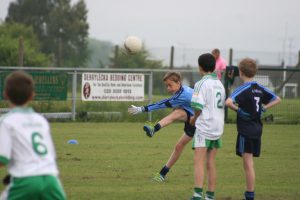 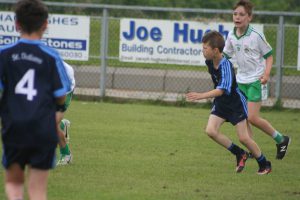 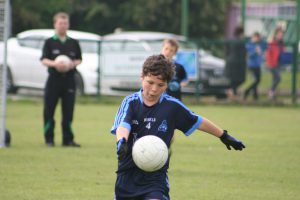 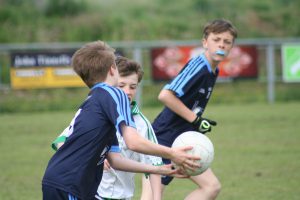 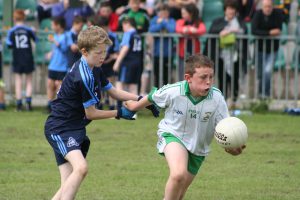 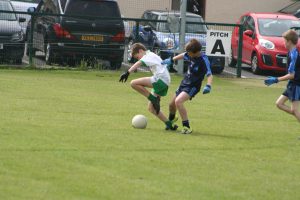 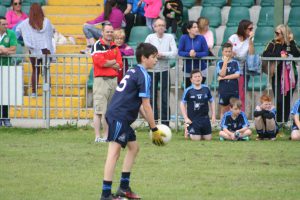 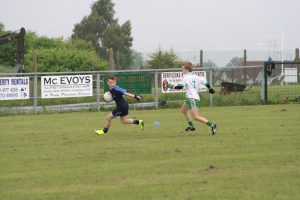