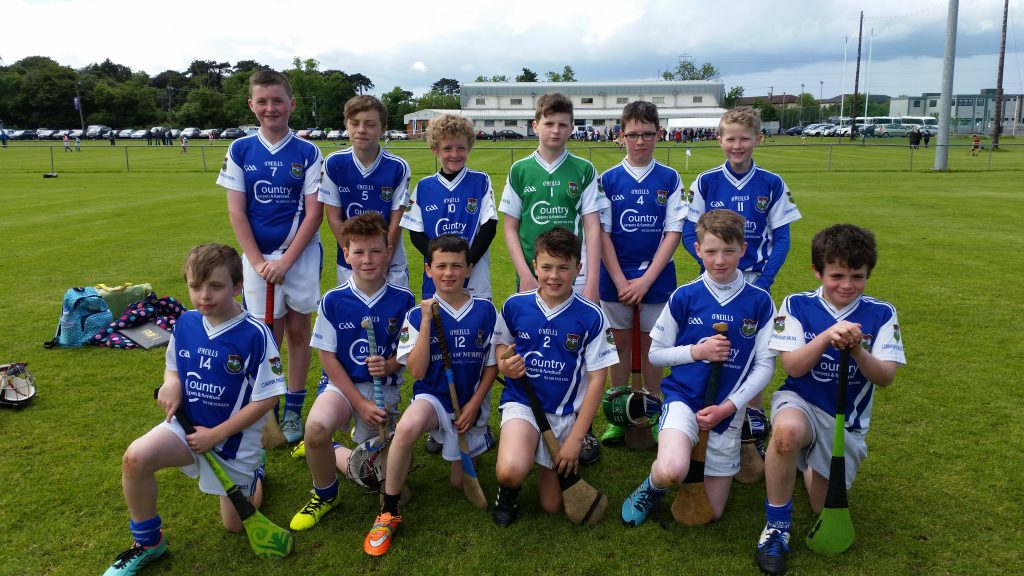 The young hurlers of Cumann Pheadaír Naofa made the long trip to Celbridge, Co. Kildare to take part in an invitational hurling tournament. With teams from all four provinces taking part and some of Irelands top clubs fielding teams the competition was going to be a really opportunity for the blues to tackle teams from Galway, Cork, Waterford, Offaly and Dublin. On the outskirts of the town Celbridge GAA have a mighty fine setup with three full size pitches, a fourth in development and a club house and gymnasium that would put many a sports centre to shame the day proved to be a well organised and well run event.

With the teams split into four groups of three, all matches 11-aside 30minutes games. Cumann Pheadaír Naofa were grouped with host club Celbridge and Camross of Laois and mangers Dermot Donnelly & Chris Rooney expected there to be some tough opposition in the opening few matches.

From the very start of the opening game a long Tiarnan Kelly delivery into the forwards saw Jarlath Donnelly latch on to the sliotar and his quick ground stroke saw Cumann Pheadaír Naofa get the opening goal. Celbridge struck back when their bustling midfielder manged to break free and score their opening point. A second point from Celbridge followed but from a Darragh Austin Puck out Caolan Freer escaped his marker, played a twenty metre pass into Tiarnan who rounded his man and unleashed a thunderous shot on the Celbridge goal. To their credit Celbridge struck back with tow mote points. In defence Matthew Duffy and Oisín Ruane were outstanding, they kept their composure when being put under pressure from the high ball and consistently gained possession to stride out of the full back line and drive the sliotar back up the field. When half forward Oran Murney played a great cross field pass to the out rushing Jarlath, the wee man gathered the sliotar, side stepped his marked and shot for a point, but the Celbridge keeper misjudged the flight of the dropping ball as it dropped over his outstretched hurl and into the net. Half time Cumann Pheadaír Naofa 3-0 Celbridge 0-4. The second half was just as exciting as the first as the large crowd of parents that travelled down to see the mighty blues got behind the boys to encourage them on. The solid defensive display of Matthew Duffy, Oisín Ruane, Mickey Keohane and Conaire McMahon managed to keep the Kildare boys scoreless in the next fifteen minutes and proved to be the foundation on which forwards Ruairí McIntyre and Oran Murney flourished as they were really starting to give the Kildare side something to worry about as they themselves sought to get back into a game that was starting to slip away from their grasp. A second stunning goal from Tiarnan Kelly was followed by a third for Jarlath Donnelly as the Ulster men proved too much for their Leinster challengers’. Cumann Pheadaír Naofa 5-0 Celbridge 0-4

With a small break before the next game the boys had a time to watch the next game in the group as Camross quashed Celbridge 7-2 to 0-2 and setup a top of the table match between the two sides. This game was to prove a bigger obstacle for the blues as the Laois side had some very fine hurlers and were well able to move the sliotar out of danger to their quick forwards. The first few minutes proved to be a game of cat and mouse as the Camross and Cumann Pheadaír Naofa boys sized each other up to see who what they were capable of. It was down to one of the smallest boys on the pitch to stand up and end the stalemate when Ruairí McIntyre struck a sweet point from all of 30 metres. Camross had obviously heard of the blues defensive capabilities had opted to drop the sliotar into the blues danger zone and attempt to score from distance to bypass the blues dominant half backline and indeed they managed to level up the scores with a point from distances. It wasn’t until a clever pass from Darragh Austin found Oran Murney and his attempt for a point dropped to the left of the posts where Ben Lock was waiting to punish the Laois men only to find his effort go inches wide. On the next attack another short ball into the Camross goal area saw Jarlath Donnelly run onto the sliotar and as he avoided the tackle of the big fullback, his goal bound shot rippled the back of the Camross net to see the blues take a shock lead at halftime 0-1 to 1-1.

Overjoyed at the lead on such illustrious opponents the Cumann Pheadaír Naofa boys knew that their Laois opponents would come strong in the second half. Indeed, this proved to be the case as attack after attack saw the Camross side claw back at the blues three-point lead and draw level with three points of their own. Had it not been for some timely interventions from Matthew Duffy, Oisín Ruane and the skilful Tiarnan Kelly and Darragh Austin at midfield the Laois boys would surely have succeeded in gaining the upper hand and possibly victory. Midfielders Tiarnan and Darragh were doing a fantastic job keeping the Camross lads busy with their tackling, blocking were instrumental in maintaining the Cumann Pheadaír Naofa challenge. Once again Oran and Ruairí McIntyre in the half forwards were proving to be a menace, as too was Cumann Pheadaír Naofa full forward danger man Jarlath Donnelly as the forwards found it harder to get their scores. The opening blues score of the half came when Ruairí McIntyre was pulled down on the forty metre line, he got up, composed himself and struck a beautiful free straight over the black spot. When Darragh Austin was fouled in possession he had the chance to put the blues two points clear, which he duly did with a fine thirty metre free. Camross’s response was immediate with another point that could easily have been a goal but for a fantastic deflected save from Evan McLoughlin between the sticks. With five minutes remaining Cumann Pheadaír Naofa found the sliotar on the edge of the square and up popped Conaire McMahon who swing connected sweetly with the sliotar for Cumann Pheadaír Naofa second goal. As time ticked away the blues held out for a fantastic victory 2-3 to 0-4 and thus go through as group winners for a chance to qualify for the final of the cup competition.

The blues opposition in the semi-final was to be Waterford kingpins Mount Sion, a team littered with fast skilful hurlers that would prove to be a totally new experience for the Warrenpoint boys and although the blues battled hard until the final whistle the Waterford boys were just too much for them to handle. The blues showed how much pride they had in their club with some great flashes of hurling most notably from Ruairí McIntyre who scored an excellent point, Matthew Duffy, Tiarnan Kelly and Caolan Freer.

With the day coming to a close the Cumann Pheadaír Naofa management were extremely pleased with their charges efforts and although losing out heavily to a quality side in Mount Sion they had not let their club or county down and would be a team not to be taken lightly in future with such spirited displays of hurling. To end the day, the host club presented the boys with commerative T-shirts with all the teams competing on the day by way of a thank you and memento of the days hurling.