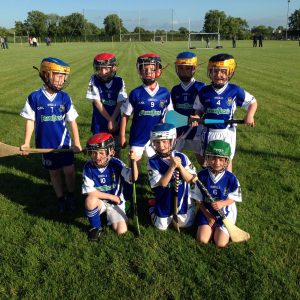 The Cumann Pheadaír Naofa U8s travelled to a very welcoming Ballela on Friday evening for a series of friendly games. The boys played four ten minute matches, coming out on top overall with a 5 to 4 goal victory. The Ballela opposition proved to be a real challenge for the wee blues. The Cumann Pheadaír Naofa boys worked well together and had a super team spirit and work ethic throughout, with Matthew Murphy making some great passes and thus enabling Jamie Lock and Jason Duffy to both score two goals each. Midfielders James Nelson and Finn proved to be very strong giving their markers plenty of problems. Whilst defenders Ciarán McMahon, Tiernan O’Reilly were great and so too was Oliver Murdock who chipped in with a fantastic goal for the blues fifth of the night. The Warrenpoint keeper, Christy Elmore was very good and backed up the rest of the team.

Team management of Averill and Colette were delighted with all whole team and can see how everyone’s hurling has improved, working well together making a great night of Hurling. Training continues every Friday night from 6pm-7pm.