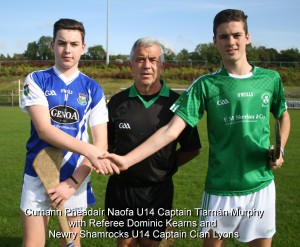 In what was perfect day for hurling the U14s took to the field at Clonduff Park for a championship final meeting with neighbours Newry Shamrocks with the boys in blue going into the game having been well prepared by manager Conor Keenan & Micky O’Sullivan having brought the standard of hurling within the squad to new levels. Shamrocks opened the scoring within a minute from the throw in when a ball played in from midfield found a green jersey in space and the sliotar was struck over the bar. The Cumann Pheadaír Naofa boys started to settle and with midfielders Conan Kelly & Eoin Cassidy winning their battles it gave Tiarnan Murphy, Zac Mackerel & Oisin Kelly plenty of possession. 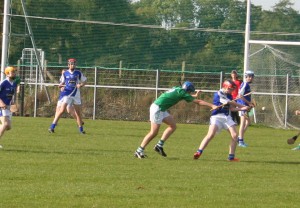 It was not long before a nice pass in from midfield found Murphy who levelled the scores at a point each, within two minutes of levelling up a long free in from Tiarnan deceived the Newry keeper as it dropped into the net, to the delight of the Warrenpoint supporters in the crowd. With every Newry attack the Cumann Pheadaír Naofa boys cleared their lines with great passion and any goal chance that came their way was quashed out with Ciaran Fitzgerald, James Murray and Jason Young between the posts. Almost with the next attack Eoin Cassidy was on target for the blues as his shot found the back of the shamrocks net, two further points from Tiarnan Murphy and the elusive Tony Magee left the point lads well in front with just a pointed free the only answer from the Newry side. As time approached the half way mark shamrocks were rewarded with their endeavours as a Conor Murphy shot skipped along the ground and sneaked inside Jason’s far post. The Cumann Pheadaír Naofa lads kept up the pressure and once again were rewarded with a goal when a poor clearance from goal resulted in the hard working Tiarnan Kelly punishing the error as his shot found the back of the net to leave the score Cumann Pheadaír Naofa 3-7 Shamrocks 1-2. 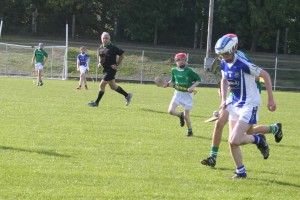 When the second half started, it was expected that the Newry side would come out and throw caution to the wind in order to quell the total domination displayed in the first half by the boys in blue. Four pointed Newry frees were answered by a free of our own and an excellent point from play off the stick of Tiarnan Murphy to keep the blues ahead by two goals approaching the final quarter of the game. It was then that the shamrocks wing forward managed to get a fortunate pull on a loose sliotar as the points boys failed to clear their lines effectively resulting in a goal which brought the Newry side to within two points of their hard working opponents. Tiarnan Murphy once more quelled the nerves with an effortless free to leave three points in it with 5 minutes left to play. 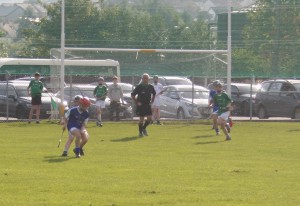 However the Newry tails were up and a well worked score left them needing a goal to win, a win which never looked possible with every blue shirt playing the best hurling of the year to hang on to the lead that had slowly diminished over the last 20 minutes. It looked as though it was to be a day of blue celebration with time up, but there was one cruel twist of fate still to be dealt out to the boys in blue when the sliotar once more made a fleeting appearance around the Cumann Pheadaír Naofa 14yd line, Luke O’Neill the shamrock corner forward pulled low and hard and his shot beat the point keeper who made a valiant effort to deflect it wide but the sliotar landed inside the post instead of wide to put Newry into the lead for the first time in the game. 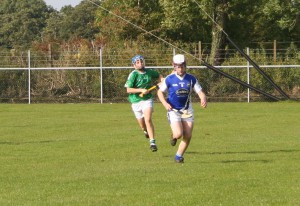 As the sliotar was pucked out it landed short of midfield but that signified the end of the game as referee Dominic Kearns blew his whistle to the delight of the Shamrocks subs bench and supporters. Cumann Pheadaír Naofa manager Conor Keenan congratulated his entire panel of players on providing an absolutely thrilling and nail biting game of hurling and although it was not to be our day he nevertheless expressed his immense pride in what they had achieved throughout the year on the field.