Senior Hurlers off to a good start in the Junior Championship 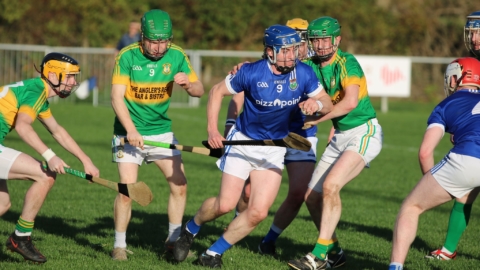 In what was probably the tastiest fixture of the Junior Championship so far, Cumann Pheadaír Naofa opened their 2021 campaign with a repeat of the 2020 county final where they lost by four points. Both sides had seen several changes to the teams that took to the field in Newcastle over two months ago, but it was a vastly improved performance from the home side that put them in with a great chance of progressing out of the group stages.

With the scoreboard being well balanced throughout, it was a nervy final quarter for Warrenpoint, eager to get their campaign off to a good start, but more importantly a result would vastly improve their chances of reaching the final stages of the competition.

Nine points from the blues John O’Kane, including six placed balls and 1-3 from Tiernan Murphy put the home side into the driving seat. Ballela, who were missing county star Ryan McCusker had to rely on Mal Magee’s frees to keep them hanging on to their hosts coat tails. The blues rear-guard of Conan Kelly, Mark Murtagh, Donal O’Neill & Conan O’Neill limited Ballela to just three points from play over the hour, as Chris Teague made an impressive return to the team after a long layoff through injury & exam commitments. Matty Teague and midfield partner Mark Rafferty dominated most of the midfield battles, whilst Alli Higgins, Tiernan Murphy & Cathal Fegan worked well up front.

A great start to the championship and a win next Saturday away to Ballyvarley would see the blues finish top of the group and secure home advantage for the semi-final stages.