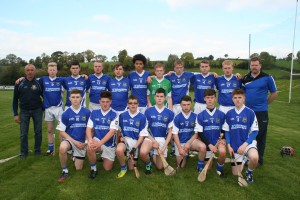 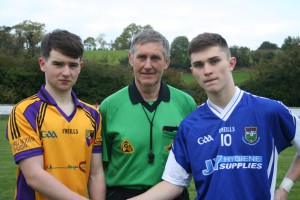 Two spurned goal chances either side of the half time whistle turned out to be the difference between the winning and losing of this county final. On an unusually dry hard ground for this time of year the Cumann Pheadaír Naofa hurlers stepped out onto the Ballyvarley field having been well prepared for a fast game of hurling and the opening score came within two minutes of the start when a long ball in from the Carryduff half backline was fielded and struck over the bar. Two minutes later a Joey Beggs free deep in our defence travelled almost 70 metres up to the Carryduff 21m line into the outstretched hand of full forward Shane Rooney as he rose up between two Carryduff defenders, caught the sliotar, turned and scored, within a minute Midfield maestro Jack Rafferty put the blues in front when he brushed his marker to one side and scored the lead point. Unfortunately the blues luck turned eight minutes in to the game with an unlucky incident which resulted in star half back Joey Beggs having to receive medical attention after a clash with two Carryduff players. On the resumption of play Carryduff levelled proceedings with a pointed free and shortly after took the lead with two well taken point from play. The blues defence were put under some serious pressure as the Belfast side pushed on for goals, but the defence failed to crack with James McParland, Andy Fitzpatrick & Oisin McCann giving Keeper Peter McCreesh very little to do in the first 30 minutes. Eight minutes from the short whistle a Tomás Magill pass into Cathal Fegan could have resulted in the opening goal but as he went to gather the sliotar it bobbled off his hurl and before he could get a second chance he was surrounded by two Carryduff defenders and the chance was gone. Two Fegan pointed frees either side of a Carryduff free saw the St. Peters side go in at half time two points down, but brimming with confidence having played into a breeze in the first thirty minutes. 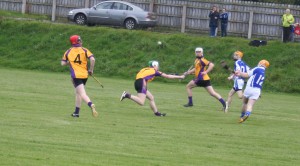 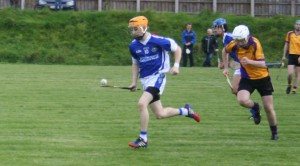 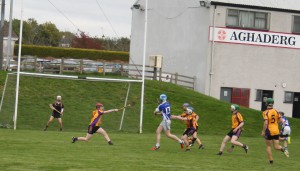 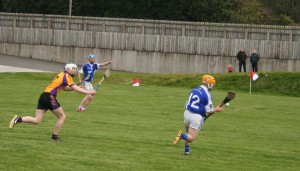 The second half started in a with the blues putting balls down the wing to half forward and man of the match Saran McElroy who tormented his marker throughout the game with his fielding and intelligent passing into to his full forward colleagues Niall McParland Callam McConville and Ronan Cunningham. As a result Carryduff conceded two scoreable frees which Cathal Fegan had no problem planting over the bar to see the sides’ level with 5 minutes played. As the blues began to rise their game once more Carryduff struck the first blow when a high ball into the blues full back line saw it bounce around before a Carryduff boot kicked the sliotar beyond the unsighted peter McCreesh. Manager Adrian McNally made a change from the line which saw the injured Michael Murphy come on for McConville and within three minutes he fielded a ball above his marker, turned and gave the Carryduff keeper no chance with a rocket of a strike to see the point lads’ level once again. At this stage Carryduff brought on their main county star to shore up the Belfast side attack and try to curb the influence of Jack Rafferty and James McParland in defence and although he was kept quiet for most of the duration of the game Carryduff once more snuck in for a goal. This gave the Belfast side a bit of momentum and three pointed frees saw them stretch the lead to six points. Another Michael Murphy point and a fine block from a Nail McParland strike when a goal looked likely saw the clock tick closer to full time. The young blues hadn’t given up and a thunderous free from James McParland saw the point lads needing a goal and a point to draw level. With full time up and into injury time Carryduff got the last score of the game which saw them finish victorious on a scoreline of 2-10 to 1-8. 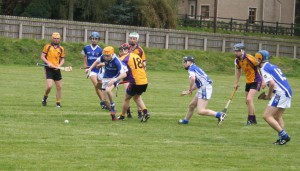 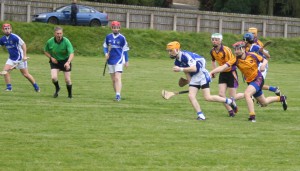 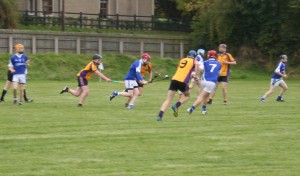 With so much talent on this Warrenpoint team, success will surely be just around the corner. The effort put in by Manager Adrian McNally, coaches Tom Daly & John O’Kane has saw the lads grow in stature as the intensity and passion for hurling for the blue jersey has made them hungrier for success in the seasons to come.