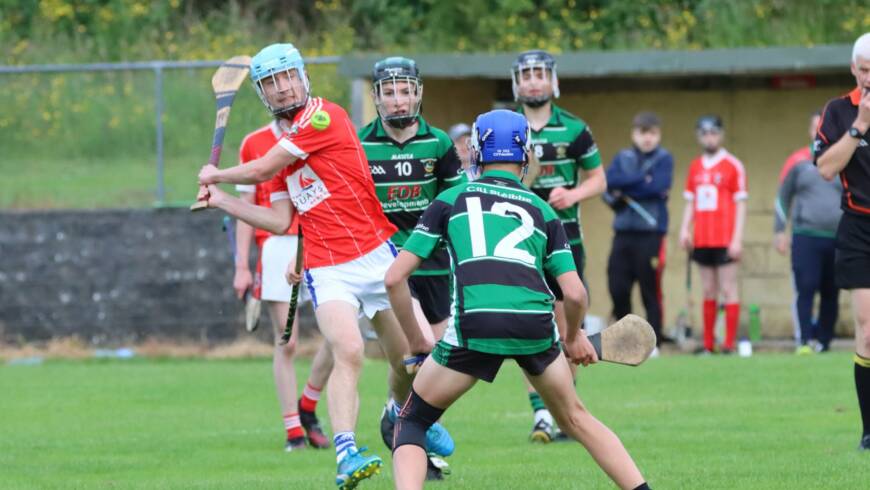 The U17s hurlers, under the Iveagh Gaels banner had a comfortable win on Friday night. Despite missing three key players, credit must be given to those who put in a serious effort to ensure that this amalgamation of Warrenpoint & Camlough hurlers can challenge league leaders Carryduff for honours.

It took all of nine minutes until Mikey Keohane split the posts with the game’s opening score and when Donagh O’Hagan had put the keeper under pressure seven minutes later causing the sliotar to squirt back outside the 14m, Tiernan Trainor was on hand to smash it low & hard passed a helpless Killeavy goalkeeper. With Keohane & Senan Magone controlling the middle third the ever-reliable Fionn Elshaw, Oisin Gambold & Eoin Garvey swept up everything from the half backline with Garvey pushing forward to raise the white flag as the half approached the half way stage and chip in with two well taken frees in the opening 30 minutes.

Killeavy tried very hard, but just couldn’t break down a very resolute rearguard and had to be content with three placed balls in the first half as they struggled to challenge the Gaels defense with Callum Giles not having anything to save in the first half.

Facing a seven-point deficit at the start of the second half, it was Killeavy who were first out of the blocks and inside the first five minutes had added a further two points and looked a lot more dangerous. But the games inspirational moment came when Killeavy’s county goalkeeper was second to a dropping ball that saw Sean Crawford pull first time on a hoping ball and lash the sliotar to the net. Moments later he plucked the sliotar out of the sky and from outside the square gave the keeper no chance with a thunderous drive that lifted the roof of the net. Now 13 points behind, Killeavy switched their forward line and within minutes it paid dividends as a long high ball caught the Gaels rearguard flat footed for a Killeavy goal. The Camlough/Warrenpoint amalgamation responded well over the remaining fifteen minutes with three pointed frees Crawford (2) & Garvey to close out the game with a well-deserved win.

The Gaels entertain Kilclief next Wednesday in their penultimate league fixture at Milltown, before preparations start for Championship & Táin Óg starts in the next few weeks.